Posted at 01:00h in Latest Stories, Your Investment Property by Kevin Turner 0 Comments

Removation is one of the best ways to add value to an existing property. Many homeowners choose to manufacture growth by upgrading and refurbishing a fixer-upper to gain profit, a strategy that is especially popular in the current market.

However, while most renovators focus on retaining a dwelling as a residence, choosing to convert a residential property into a commercial one (subject to council approval) could also be a great way to boost both your returns and the property’s value.

It’s no secret that a commercial property can offer a higher return on investment than a residence. It can also offer you the opportunity to secure a long-term lease so you don’t have to constantly worry about keeping the property tenanted. Commercial properties thrive in a market with a strong economy, and by investing in the right area you can enjoy tremendous gains.

Here, reno expert Paola Tapia shares some tips on how you can go about transforming a residence into something with that elusive X factor. 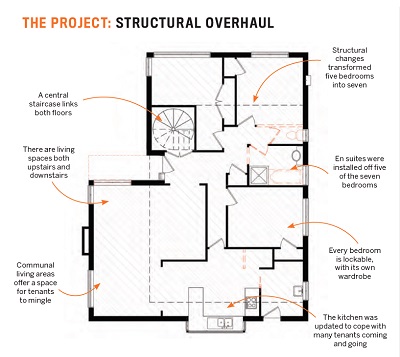 STEP ONE: SET A FIRM BUDGET

It goes without saying that at the beginning of your structural renovation project you need to set a firm budget. Sometimes, warns Paola – who transformed a residential home into a commercial rooming house – you’ll be dealing with “unknowns”, especially if you’re going to add rooms and modify spaces. Don’t be afraid to call on the experts when needed, while also keeping your budget front and centre of every decision.

For instance, when Paola renovated the kitchen, she retained the same structure but slightly modified the layout of the stove and oven for better functionality. For a modern yet affordable look, she chose strategic design accents, such as economical subway tiles along the splashback instead of expensive bespoke tiling. 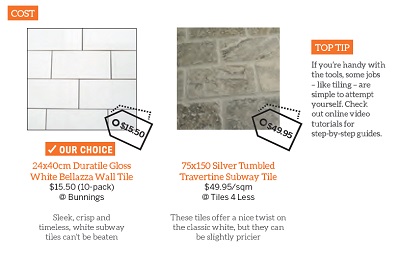 … And you’ll get monkeys. This applies to products and services, whether it’s the toilet you’re installing or the plumber you’re paying to install it.
Paola learnt this the hard way when she hired an inexperienced tradie.

“I had a new tradesman who decided he wasn’t going to continue the job, and just left the job site with the tiles outside on the street – he didn’t even move them inside!” she says.
After starting the tiling, he walked out when he realised he’d underquoted. “He decided to just leave, and didn’t say anything. You really need to make sure the people you work with have great ethics,” Paola warns.

TOP TIP
Don’t be afraid to ask your supplier or tradesperson for references. A good tradie will be more than happy to show you evidence of their happy clientele, as they have nothing to hide. Ask for written references or better still, the ability to chat with previous clients.

“Our project was a major reno,” says Paola. “We were going from a five-bedroom, two-bathroom home into a seven-bedroom, five-bathroom home.”  As a result, looking for opportunities to perform upgrades cheaply and efficiently was one of her key goals.

With five bathrooms to create, including three that were rebuilt from scratch, Paola began searching for bulk-buying discounts. She also leveraged the scope of works with her tradespeople to get the best possible deal.

“I wasn’t there at all times supervising. I’m not a builder myself, so I had to rely on the knowledge of the trades,” she says. 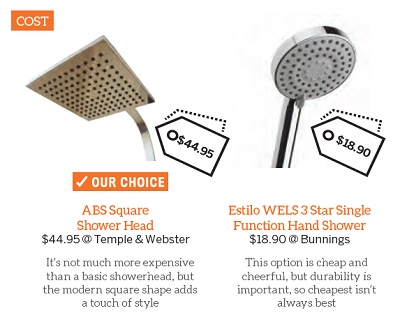 TOP TIP
Schedule all of your plumbing works to happen at once, in your kitchen, bathroom and laundry; this will help you secure the most competitive price with your plumber.

Even when you’ve got tradespeople working for you, Paola reiterates the importance of being willing to get your hands dirty by personally shopping around for the best prices, quotes and deals. Depending on your skill set, you could save money by doing some painting yourself, or by being your own handyman.

Suppliers’ prices can vary greatly on items that don’t look much different when installed. Tapware is a good example. Does spending $500 on tapware really add significant value, when you can spend $50 and achieve the same look and function? This is the value that shopping around can bring to your project! 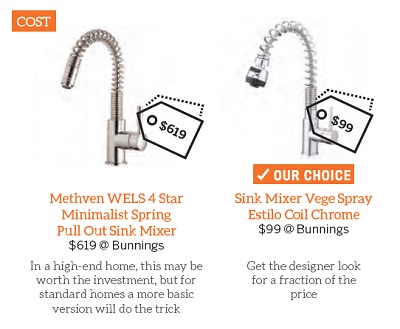 TOP TIP
Be sure you are replacing like for like where possible. When replacing kitchen taps with a flick-mixer, for instance, you may need to plug holes where the existing taps were plugged in.

STEP FIVE: DIY WHERE IT COUNTS

To make the project as profitable as possible, Paola took on as much work as she could herself. “My career previously was in marketing, but I decided to stop working those long hours and
do property makeovers as a full-time business,” she explains.

“On this property, located in Frankston, I did all the project management, scope of work and timing. I negotiated rates with [tradesmen], specifically on the work that needed to be done. I was also sourcing all of the material myself and did some DIY, such as painting work, while my husband did a bit of handyman work. We started in October 2016 and finished in May 2017, and it was tenanted right away.”

TOP TIP
Don’t try to do everything yourself. It might be tempting to save money, but with certain DIY tasks – like electrical work – going DIY can be dangerous.

We’ve all heard the cliché that ‘first impressions count’, but when it comes to property, it very much rings true. No matter how hard you’re working on the inside of the home, it’s essential that you pay attention to the outdoors as well.

In Paola’s case, this meant completely repainting the exterior of the building and updating the roof, while also adding new turf and landscaping.

Because the home would be rented by seven different tenants at any given time, it was essential that all landscaping, plants and shrubs were hardy, as providing low-maintenance living was Paola’s goal.

TOP TIP
Create a garden with your tenant in mind, not yourself. Your tenants may have no interest or expertise when it comes to maintaining the garden, so keep it simple.

If Paola had been renovating a family home, she would have made certain design choices to suit that market.

However, her target audience included students, young professionals and other singles seeking their own room in a larger rooming house, so she adopted a renovation strategy to suit her eventual renters.

This included refurbishing the kitchen both upstairs and downstairs so tenants on both floors had access to cooking facilities.

“We also turned the laundry downstairs into a common, self-serve laundry,” she says. 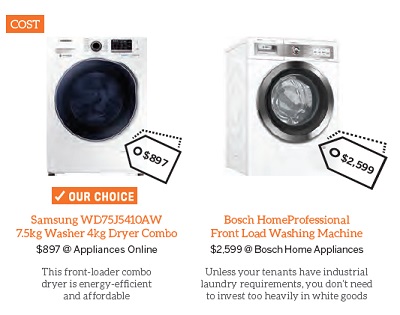 TOP TIP
Installing a washer and/or dryer can add to your property’s appeal with tenants, whilst also attracting depreciation benefits at tax time.

Paola Tapia entered the property investment game only a couple of years ago. While her experience lay in marketing, real estate piqued her interest as an option for bringing passive income into the household, and she grew interested in doing property makeovers.

Paola embarked on her reno journey by seeking out suburbs that were likely to see growth.

“If I look around at where I live in Doncaster, everything is already booming,” she explains.

So she looked further afield, and her search brought her to Frankston, a beachside suburb on the bay in Melbourne. Paola saw that it had a chance to become a thriving hub in the region, given the investment being poured into it. In late 2016, she put down an offer on a property, trusting in her valuation.

Having the necessary funding at the ready sweetened the deal, as she was able to settle the transaction quickly. Paola then set about transforming the property from a five-bedroom residential home into a seven-bedroom, five-bathroom rooming house. 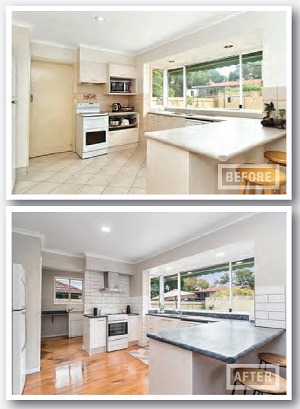 Once all of your hard work is done and the renovation is complete, the final step is to bring it to life with beautiful styling. Granted, it may require a small investment, but the return on investment will generally outweigh the cost, Paola says.

“I did all the design myself, including all of the colour schemes and the styling. I did some courses in styling so that I understand spaces and layouts and flow, along with  furniture placement,” she says.

A modest second-hand sofa with a few key accents can brighten a space and help buyers or renters imagine living there, so don’t scrimp on this step if you can afford it.

TOP TIP
Styling to add ‘finishing touches’ gives your property a polished look. Style your property before professional photos are taken, and keep those images on file to advertise future vacancies. 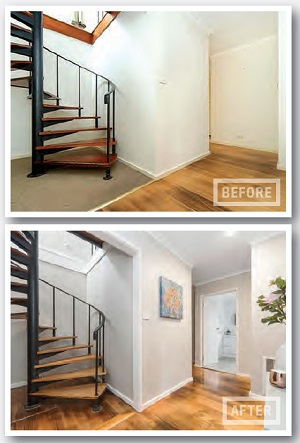 “We needed to do not only cosmetic renovation, because it needed to be updated, but we also needed to create more rooms and more amenities. When we went through it initially, we discovered that it had the right ‘bones’ for us to turn it into a commercial property, so we turned it into a rooming house, which is like a shared house. We spent $115,000 renovating, all up,” she explains.

“It’s the most rewarding feeling when you get it valued!” she says. “After purchase and renovation costs, there was a $200,000 increase in value. That kind of money can change people’s lives. I enjoy the end result of making things look better, but it’s not just for the aesthetics. The money is going to give us more equity to invest again.”