In this ever-changing digital world, global demand for computers, iPhones and electronics is enormous, and with a focus on reducing air pollution and creating alternative energy sources, the demand for wind turbines, electric cars, and energy-storage batteries is set to go through the roof.

What’s common to all these is a range of very precious metals and minerals that are only found in a limited number of locations around the world. One such location is Dubbo.

“From rare earths and precious metals to some of the best-quality red meat in the world, this very lucrative region has already seen a spike in jobs at a rate that is three times higher than the national average,” says Simon Pressley, Propertyology’s head of property market research.
He believes the biggest and most interesting future growth driver for Dubbo’s property market will be the hundreds of direct and indirect jobs to be created from the development of a unique mining project and associated rare earths processing facility by Alkane Resources over the next two years. 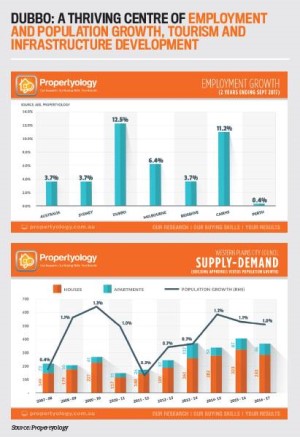 “Dubbo itself is not a mining or farming town, but the region is rich with commodities, including gold, scandium, coal, gas, zirconia, beef, sheep, wheat, barley and canola,” Pressley says.

“There are many pleasant surprises about Dubbo.  This strong regional city has maintained an unemployment rate well below the national average for several years and has produced an increase in jobs at a rate that is the envy of capital cities.” (See graph.)

“The city has also invested heavily in quality social infrastructure.

With its Regional Theatre and Convention Centre, good-quality hotels and excellent sporting facilities, the local economy frequently benefits from hosting major events,” Pressley says.
The federal government also recently committed to building Australia’s largest-ever non-capital-city infrastructure project, the $8bn Inland Rail Project. Dubbo is one of several cities that stand to benefit from economic development as a result of being able to distribute more of its produce and products along the future Melbourne–Brisbane rail freight connector.

“A change in localised economic conditions is generally a precursor to a change in property market activity, while a sustained improvement in employment conditions gives a community confidence to buy their first home, upsize, renovate or relocate,” Pressley says.

“We believe that there are numerous reasons to be extremely confident about the long-term prosperity of this grossly underestimated regional city.”