Do property prices double every 10 years?

In his regular weekly column on Switzer John McGrath gave his thoughts on the year ahead in property.

Here’s what he said:

There is an old saying in Australian real estate is that property prices double every 10 years.

The reason many people are sceptical of this equation is because this price doubling does not occur in a uniform line.

There is no neatly rounded 10% price gain every year in every market – we see low growth years and high growth years but when you add them all up over 10, you get about double growth.

This has been happening in Australia for the past century.

A recent CoreLogic RP Data report shows home values did indeed double – in fact they more than doubled, in the 10 years to January 2006.

Across the combined capitals, home values increased by 152%.

In the following 10 years to January 2016, home values didn’t do as well by comparison.

But you have to remember that these are average percentages across a multitude of cities.

Buyers of Australian real estate should generally expect their properties to double in value every 10 years, especially in big city markets like Sydney and Melbourne; and especially if they buy well.

In order to give yourself the best possible chance of doubling your money in this timeframe – or even sooner, here are the things to consider when buying:

1. The most important thing you can do is buy good quality properties in desirable locations close to essential amenities like schools, shops and transport

2. Buy properties with features that are always going to be in demand, such as open plan living spaces and alfresco dining spaces in the backyard

3. If there’s room to add value, that’s even better as a well-executed renovation or extension on a good quality home will enhance its value exponentially

4. Good quality properties in desirable locations will typically enjoy stronger capital gains over the long term, so buy with a 10 year minimum in mind if you can

Here is a fantastic graphic published by CoreLogic RP Data showing how property prices have risen in each city over the past two decades. 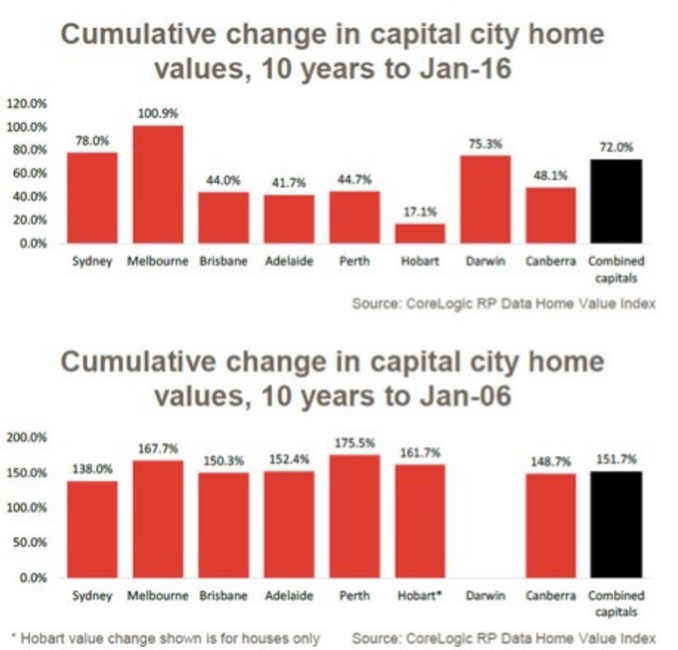 These graphs also give a few indications as to where property values are headed in the future.

Here are a few key insights from this data:

1. Sydney will always be strong as the fundamentals contributing to prices rises such as undersupply, high population growth and being a hub of employment will not change

2. Growth in Melbourne over the past 10 years has been outstanding and actually surpassed Sydney in both decades. Melbourne still offers better value for money than Sydney and I think its growth trajectory will continue for two reasons – it offers lots of employment just like Sydney; and it’s the obvious alternative for Sydneysiders who can’t afford Sydney prices

3. Brisbane, Adelaide and Perth are overdue for growth and stronger capital gains are likely over the decade to 2026

When we look at property over a 10 year period, it’s easy to see how well people can do out of bricks and mortar. It’s also a great reminder that the time to buy is always as soon as you can afford it; because no matter where we are in the cycle when you buy, the odds are you will double your money over the ensuing decade.

Just be conscious that it won’t happen in a straight line and you have to be prepared to ride out the lacklustre years in order to enjoy the phenomenal boom years like those we’ve just experienced in Sydney and Melbourne.