Short-term rental agreements have long been considered high-risk by property owners, but thanks to the meteoric rise of the sharing economy and platforms like Airbnb, perceptions are quickly shifting.

Now, an ever-increasing number of investors are leasing their properties on a short-term basis – often to travelling professionals or international tourists – for an impressive premium.

However, with the market having enjoyed a significant boom of late (Airbnb listings in Australia jumped from 43,610 in December 2016 to 89,863 in December 2017), could supply soon outrank demand?

Three short-term rental specialists from property management firm MadeComfy are confident that’s not the case and have shared their thoughts about what’s on the horizon for Australia’s three biggest cities. 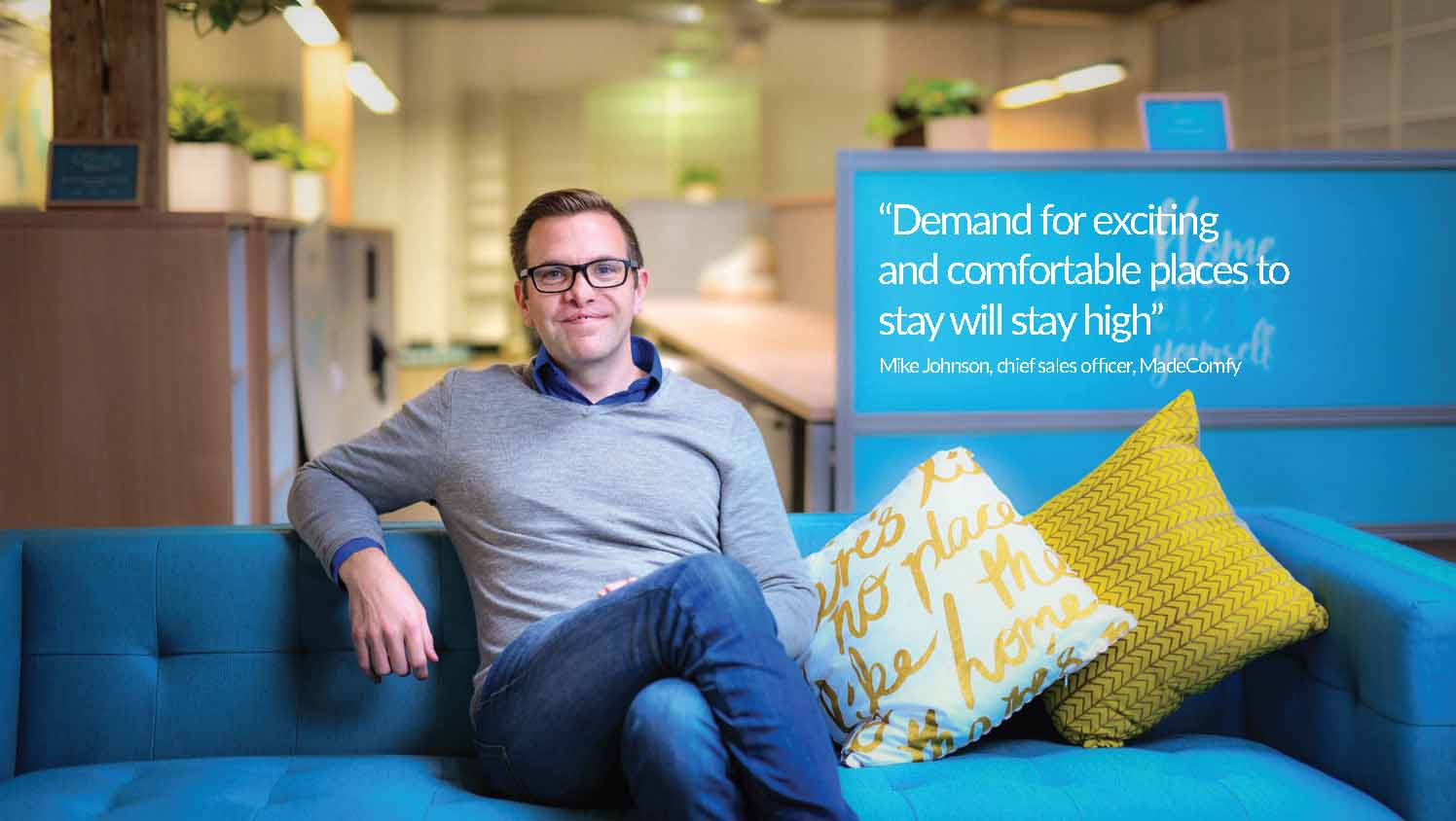 Undoubtedly the most popular city in Australia for short-term rentals, Sydney saw 41,000 Airbnb reservations in December 2017 alone (according to MadeComfy’s Short Term Rental Report) and it seems the same is set to continue in 2019.

“The Sydney short-term rental market is driven by demand for places to stay by an increasing number of international visitors and interstate visitors,” says Mike Johnson, chief sales officer at MadeComfy.

The most recent figures from the NSW government show that Sydney received over 9.9 million domestic visitors and nearly 4.1 million international visitors in the 12 months to March 2018.

“The number of hotel rooms available is not increasing as quickly in certain areas, and more and more visitors want to stay in homes, apartments and near their family, rather than near the city or popular tourist destinations, and this will continue to increase short-term demand in Sydney,” says Johnson.

Unsurprisingly, Sydney also enjoys the highest price point per night, and Johnson says owners in the region can expect the same steady income throughout 2019.

“Sydney has a unique combination of city, harbour and beach locations, with events, sports and entertainment all year round across its diverse set of suburbs,” he tells Your Investment Property. 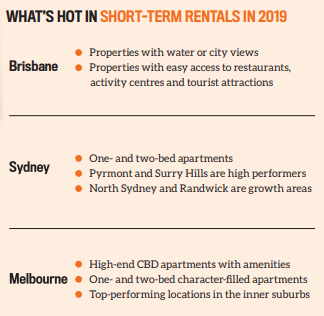 “The warmer climate brings tourists into Brisbane all year round”

“This means the demand for exciting and comfortable places to stay will stay high and continue to support higher returns for property owners.”

Looking ahead, Johnson also says Sydney will be impacted by the NSW legislation for short-term rentals that is likely to come into effect in mid-2019.

“This fully legalises short-term rentals in NSW, and also allows owners to use a blend of short-term and mid-term stays to get maximum returns whilst still working inside the legislation.”

Known for being both unconventional and creative, it’s no surprise that Melbourne has embraced the sharing economy, and the short-term rental space, particularly quickly.

In fact, in the state of Victoria, short-term rental bookings made up 16% of all accommodation bookings – the highest percentage across the entire country.

While the per-night rate for listings in Melbourne is lower than Sydney’s, property sale prices are comparable and demand is high, so investors in both cities can actually expect to make similar returns, says David Powell, general manager of MadeComfy’s Melbourne operations.

“Melbourne has consistently shown that if you have the right property, marketed correctly and managed well, the returns in percentage terms are very strong, especially for apartments in the inner city and inner suburbs,” Powell says.

Importantly, high-end CBD apartments with quality amenities such as a gym, pool or lounge have become extremely rare in the city and could offer an incredibly lucrative opportunity in 2019.

“I expect these types of properties to perform very well if brought to the short-term rental market,” says Powell. “One and two-bedroom character-filled apartments in inner suburbs, which are furnished and styled professionally, will also perform well because they have the ability to stand out from the crowd in a market that is often saturated with clinical new-build apartments.”

The short-term rental market may be dominated by Sydney and Melbourne, but property owners in Brisbane have one thing over this city’s more popular counterparts that definitely shows no sign of changing in 2019 – that’s the weather.

“The warmer climate brings tourists into Brisbane all year round, particularly during winter and spring when visitors from the southern states look to escape the cold,” says Melissa Baker, general manager of MadeComfy’s Brisbane operations.

Of course, reliable weather isn’t the only thing Brisbane has going for it – in fact, the city is less affected by seasonality than both Sydney and Melbourne because accommodation demand is strong from both business travellers and tourists.

“Brisbane is the primary Queensland business hub for operations that have satellite offices in regional centres; this regularly brings business travellers into Brisbane,” says Baker.

“The region is also often used as a midway stop for tourists travelling through Southeast Queensland; they regularly visit the city for a few days while travelling between the Gold Coast and Sunshine Coast.”

Clearly, there remains much opportunity for property owners in the short-term rental space, particularly those with investments in one of Australia’s largest cities.